So we humans see three channels, Blue, Green and Red. Bees however can see UV (what we can't), Blue and Green. So if we take a shot in UV and combine it with a visual shot were only the Blue and Green information is used, we can synthesize how Bees see the world - in priciple. The problem is, that we can't see UV so that has to be "translated" into our color space.

Some examples for that follow. This is a well known plant, Bougeanvillea. Here the visual shot first, click on images to see larger files (1024 pix): 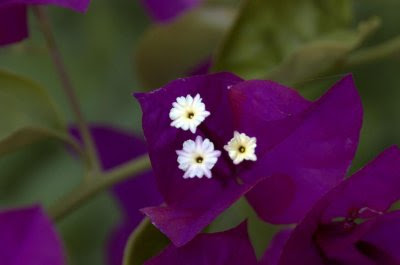 The UV shot however looks very different, like that: 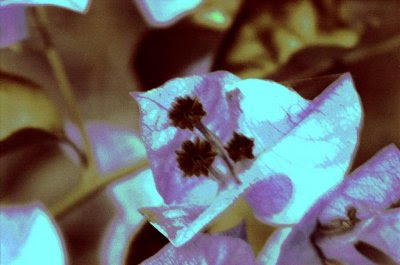 So if we now apply the procedure mentioned above, the result is: 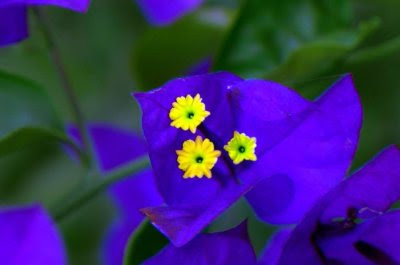 Here now another example, a shot just around my house on a path along the road taken this spring. In visual light this looks like that: 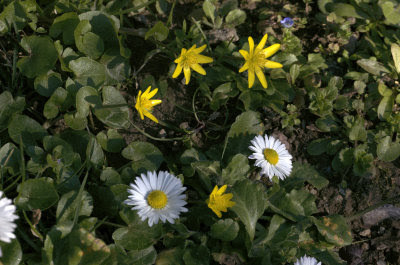 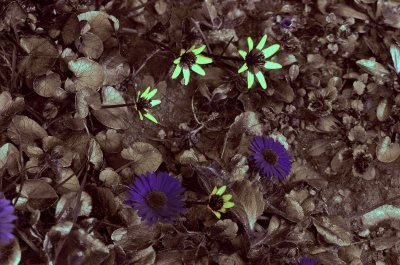 Bees however will see that (or what I think looks like what Bees see...). 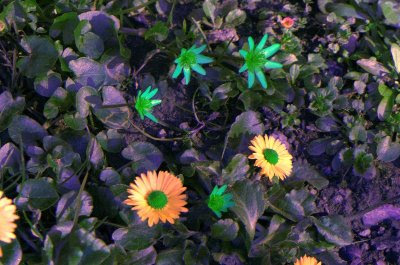 So maybe now we understand a bit more what flowers do to attract pollinators. This is just one example of a multitude of ideas nature has applied.

[UV] Rudbeckia - a study of lenses for UV photography

This was meant as a simple and unscientific comparison of some lenses for UV photography with focal lengths 50...60mm. All shots Nikon D70 + Baader 2" U-filter + Sb-140 flash @ ISO400, identical postprocessing for all results. Click on images to see larger files (1024 pix).

1) Rodenstock UV-Rodagon f5.6 60mm @f8 [this is the reference lens which has no no focus difference at all, works down to about 300nm, ideal for modern camera chips]: 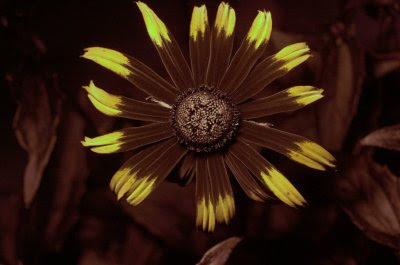 2) Carl Zeiss Jena UV Objektiv f4 60mm @f8 [trial-and-error to focus, massive focus difference, that is why the image is that large, UV focus is much closer. Works down to 200nm]: 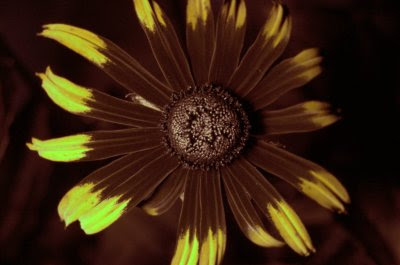 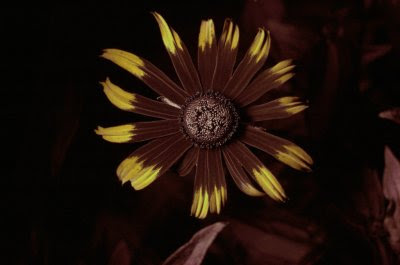 4) Carl Zeiss S-Planar f4 60mm @f8 [slight focus difference in unusual opposite direction i.e. further away. Quite a surprise that this 300lpm lens also does UV to about 340..350nm, the different color rendition shows the lack of UV transmission]: 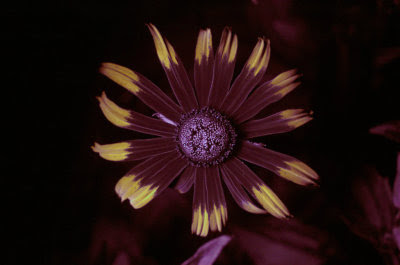 5) Tomioka Macro Yashinon f2.8 60mm @f5.6 (due to limited and very narrowband UV response aperture had to be opened one stop) [slight focus difference in usual i.e. closer direction] [This is a non-working example of a modern multicoated lens; many others show the same UV transmission and blueish results; only useable to about 375..380nm which only leaves a useable 10..20nm window, this is why the image is nearly monochrome. Some tweaking might be applied to reach about the same color rendition as with the other lenses, but with substantial efforts] : 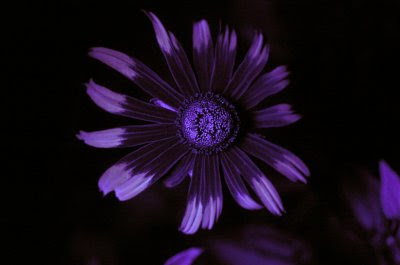 6) Steinheil Quarzobjektiv f1.8 50mm @f8 (about, since it uses that old pre WWII aperture setting of f7.7) [strong focus difference in usual i.e. closer direction] [This 1930ish lens is also a noncoated one, so it is sensitive to flare and doesn't have the high contrast modern lenses have...but still surprisingly good. The chance to also use it at f1.8 allows some dream like ethereal UV images. And it does it down to 200nm] : 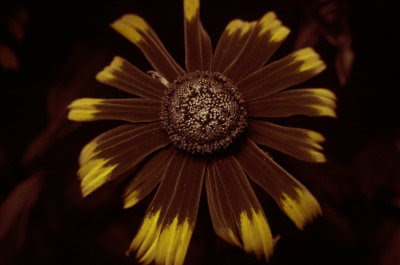 7) selfmade lens from Quartz Achromat ca. 50mm @f8 (about) [strong focus difference in usual i.e. closer direction; strong abberation and bent field gets visible, but if that is all you have, not bad at all and useful down to 200nm, much more than modern camera chips can handle (ca 300nm)..] : 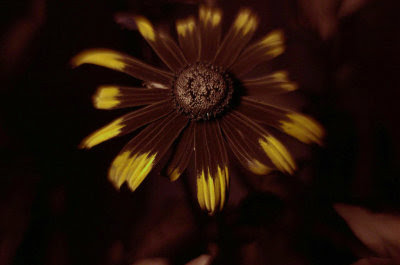 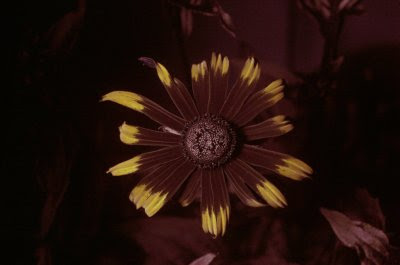 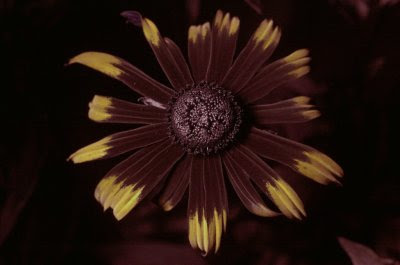 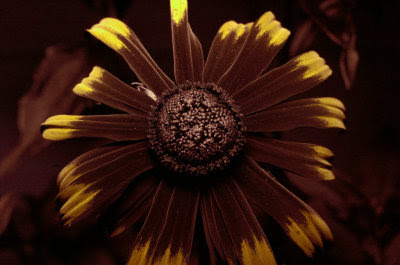 This is the visual reference shot [also using the UV Rodagon 60mm]: 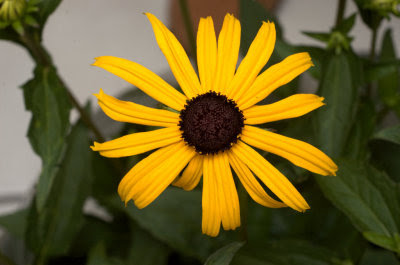 [UV] How to recover a fainted thermo paper receipt

Reflected UV Photography fascinated me since the first time I read about it on http://www.naturfotograf.com/ . But it hasn't been used on landscapes and wonderful flowers only, one of the most important aspects was forgery detection an forensics also. Here is some literature on that http://msp.rmit.edu.au/Article_01/16.html

Today I made some quick tests with an older fainted 2003 thermo receipt from a gas station. My goal was to get back the fainted information on that receipt using my Nikon D70 @ISO200, Nikon SB-140 flash and an UV Rodagon 60mm lens. The idea was to try out reflected UV, UV fluorescence and reflected IR. 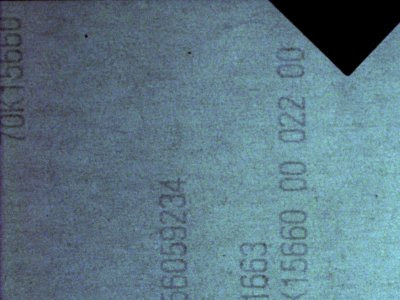 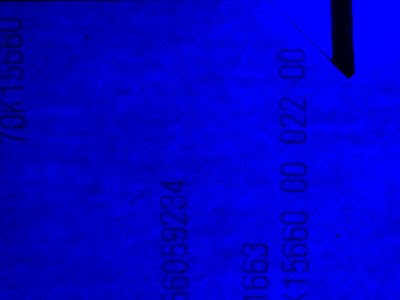 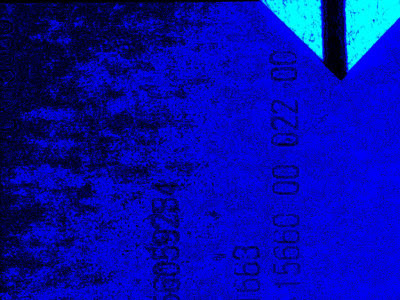 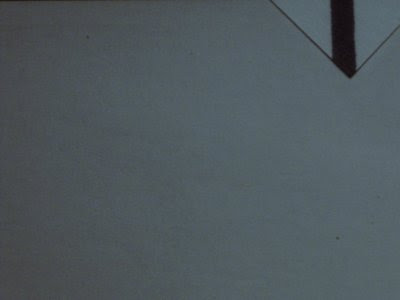 In my opinion the reflected UV and UV fluorescence works quite well, but the IR seems to fail.

The good thing is, that for UV fluorescence one doesn't need an UV transmissive lens (like the one I used), but a "normal lens" suffices. All one needs is an UV blocking filter (like the Baader UV/IR cut filter) plus a strong flash which emits UV. One has to be careful to block unwanted IR, since that might render the results useless (cf #4). So ideally one should have an
UV/IR cut filter in front of the camera lens.