Today again about the "workhorse" of reflected UV photography, the Baader-U "Venus" filter. The old Baader-U had 40 dichroitic layers, the new and currectly sold one has about 100 layers of dichroitic coatings, but on an ionic colored substrate (Schott UG11). That dichroitic coating is only applied to block the IR leakage that SCHOTT UG11 filter glass has, but not to define the filter characteristics itself, as in the case of a pure dichroitic filter on a transparent substrate.

It has been argued that dichroic filters are sensitive to the angle of incidence of the light and that the filter pass-band would be shifting towards shorter wavelengths. What was argued is, that if using wide angle lenses (which hardly exist for transmitted UV anyway), rays may enter the filter at such a high angle of incidence, that the filter transmittance and overall filter characteristics would severely be altered.

That mentioned effect is there of course, but in practice (at least in mine), I have never noticed a negative effect, also since my shortest focal length was about 28mm only and the largest sensor used APS format. At much wider angles and using a full format sensor it would certainly have more impact.

But let's just see how much impact in practice that really has...

Here a spectrometric measurement done in my optical lab (at 0-degrees and 45-degrees incident angle) to show the influence the angle of rays has.

So we see that about 10% in transmittance are lost at 45 degrees, which equals about -1/8 EV and so that has no real relevance on the photographic result. There is also some shift towards shorter wavelengths, but actually it is more a broadening of the total transmission band towards shorter wavelengths of some 13nm (325nm --> 312nm) on the left filter shoulder, whereas the right filter shoulder nearly remains the same (390nm --> 388nm) using the 10% transmittance values - that actually being a positive effect.

In summary the total transmitted energy (= proportional to the area under that curve) should stay about the same, so no effect on the exposure time should be expected, but an ever so slightest change in colors towards the edges of the image might be noticed, if using a full format sensor and a wide angle lens for reflected UV photography - which I have never noticed in my photographic practice.

Well and then there was a thought in the back of my head and I wondered what a ray at an incident angle of say 45 degrees would have to suffer if it had to pass through much more ionic classic "normal" i.e. uncoated colored filter glass at that angle in comparison to a ray at 0 degrees angle... 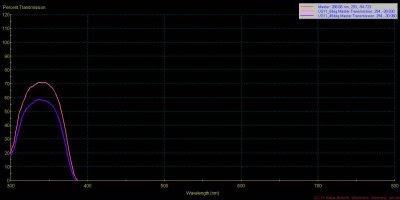 Interesting 12% peak transmittance loss, but no broadening of the transmitted band and no change in shape. In total also only about -1/8EV loss of transmittance, so not really of photographic relevance. 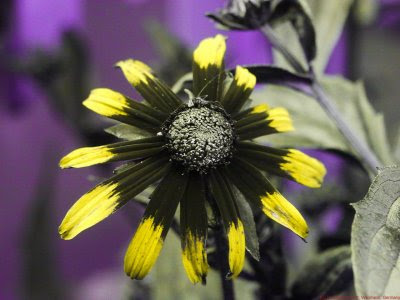 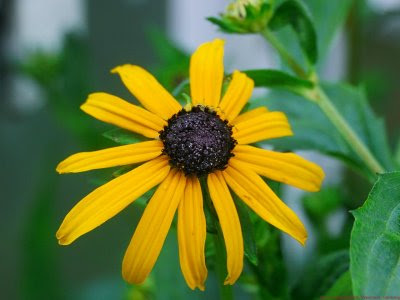 Interesting to see how that UV pattern emerges within days; let's see what's happening on the following days ...

[ssshh, did you see the guest?]

More info on this very interesting field may be found on my site http://www.pbase.com/kds315/uv_photos
Gepostet von Dr Klaus Schmitt unter 2:39 AM