Well, many years ago in times of the cold war, Zeiss Jena had to developed special lenses for a very special ministry of the former east German GDR (dig you guess which one I mean - STASI, also called MfS), which are hardly known to the public, but are available. These are corrected for focusing in visible light, but also for shooting in (deeper) invisible NIR. There were also special noiseless cameras (GSK also called SR899) developed for these lenses.

To make things clear, I distance myself from that former purpose, but am interested in the performance of those special lenses!

The lenses were designed in such a way that the aperture location (more precisie the entrance pupil) was in front of the lenses, which allowed taking photos through small holes in walls, through button holes in bags etc. - I guess the purpose gets clearer now. A set of fixed apertures and also a variable iris usually comes which each lens. All these lenses cover the full 24x36mm format.

I was able to get a set of these very special lenses thanks to the contact to and the efforts of Detlev Vreisleben, a german engineer who, after his retirement has concentrated to shed some light onto these.

Here a list of these lenses (SO = "Spezial Objektiv"):

They have a special M36 camera thread mount, but are easily adaptable.

First tests have shown very good to excellent sharpness in VIS as well as NIR. More about that later...

And no, they don't transmit UV at all, since designed for the other end of the spectrum incl. the special NIR coating. 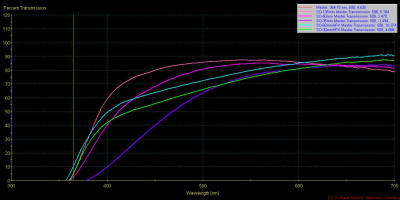 (The 75mm Tessar is missing in that graph; two further lenses are included for the HFK "half format" camera)