A friend of mine, Dr. Andreas Wistuba, collects and breeds special forms of carnivore plants and we were both wondering if some would show some UV reflective patterns. Well indeed, some do on these "needles" which prevent their prey to escape!! 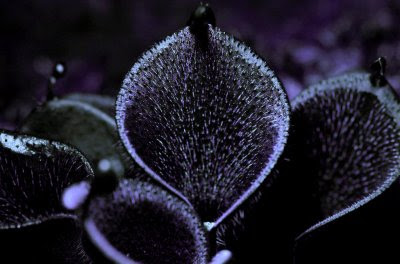 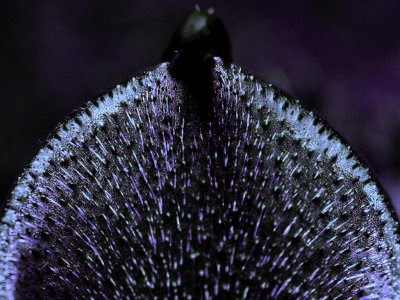 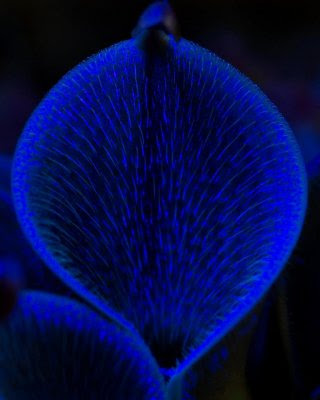 Not sure what caused that, but evolution surely had a reason to develop that UV pattern!

I invested some time today and measured the spectral transmissions of some 135mm lenses I had around.
[click on graph gives a larger image] 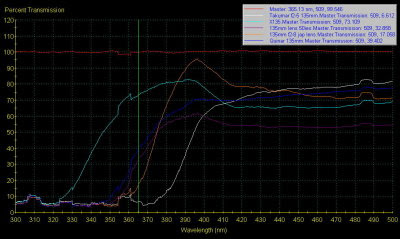 [please ignore the dips and jitter of the measured curves, that comes from that setup/Deuterium lamp used, this can also bee seen on that red 100% line w/o lens...]
I took the 365nm line as the wavelength to decide about the usebility of such a lens, since it is the center transmission of that famouns 2" Baader U-filter I mostly use for UV photography.  The X135 @365nm reaches 73% UV transmission (and it transmits down to about 320nm which correlates fine with the end of the UV sensitivity of an UV sensitive camera such as the Nikon D790 or D70s), wheras the next best one has only 39% (Quinar). Lens No.1 is a good example of what could be expected from a modern, multicoated lens in terms of UV transmission - not much actually since the multicoating and internal cemented lenses efficiently block UV, thus leaving such a lens quite useless for UV photography as compared to #2!
Please bear in mind that a useful UV transmission is just ONE criteria (but an important one) for successful UV photography. Resolution, sharpness, contrast, stray light and flare control, lack of hotspots etc. and focus shift of course are other important factors to consider.

HERE is a list of all lenses good for UV photography.

More info on this very interesting field may be found on my site http://www.pbase.com/kds315/uv_photos
Gepostet von Dr Klaus Schmitt unter 11:06 AM

Here now some infinity tests I made using the same stacked filters to see if there would also be some useful response below 350nm, using sunlight as an UV source. Again both the mod. Nikon D70 (clear quartz glass >270nm) and the Sigma SD-14 without internal filter (which can be clicked out easily without need for a professional service)  were used.

Lens used was a X35 wide angle lens (f=35mm) in both cases (infinity mount conversion done for the Nikon, M42 version with adaptor for the Sigma), shot at ISO200. [In all cases please ignore the vignetting of the corners, this was caused by the experimental filter mount I used, which could be done much better to avoid that effect]

This (blurry) result came out of the Sigma SD-14 after 30 sec exposure and f4 used: 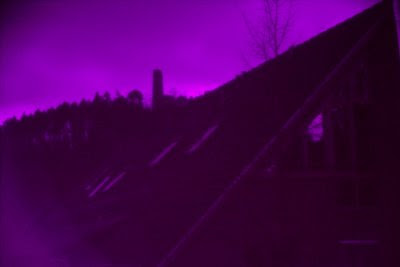 It is pretty obvious that only the blue channel of that stacked FOVEON chip responds to UV radiation (as the theory also says, since that chip does not use any dyes to filter, just the effect that silicon filters out shorter wavelengths the deeper light (UV, VIS, IR radiation) penetrates that silicon chip. (c) photoscala.de 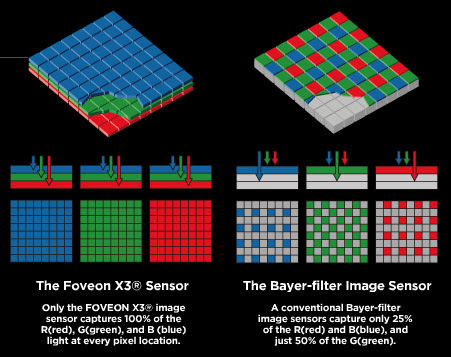 The Nikon D70 result after 30 sec exposure and f8 used showed a much clearer image and two channels being stimulated (blue + red) by that short UV at 330nm peak. Not sure why the results is so much sharper, be it the stepped down to f8 or the infinity converted same lens used. The hue was adjusted so as to match the Sigma result. 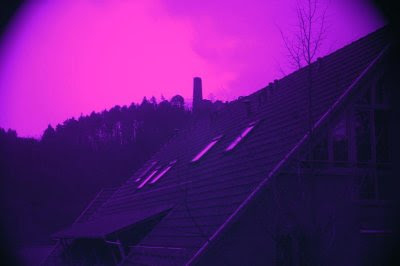 That second image shows the result straight out of the Nikon D70 camera: 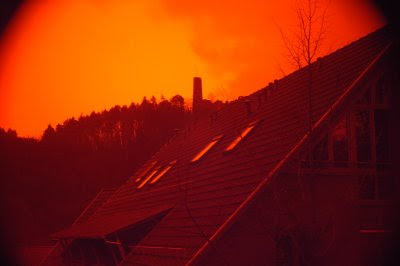 And NO, this is NOT infrared (IR), just because it is red! I checked with my spectrometer carefully that no IR passes. The color is caused by the fact that at these short UV wavelengths (nearly) only the red channel of that Nikon D70 CCD sensor has some useful UV response (maybe due to visible fluorescence of that red filter dye of the Bayesian filter used when expsosed to UV radiation)

To summarize my findings:

It gets pretty obvious, that the mod. Nikon D70 has the much higher UV sensitivity of ca 2EV @330nm. I can only guess that the higher sharpness is due to f8 used and since the UV-infinity converted Noflexar 35mm version was used and not the off the shelf M42 version as for the SD-14. The Nikon image has been adapted to the color of the Sigma, but has pretty much red and a little bit blue channel response. The Sigma only gives some monochromatic blue channel response at much less sensitivity.

So in short the findings:

Some remark here: This has been done since I get many questions about how far a modern DSLR may be able to record UV. Although it has been proven experimentally now that there is some response, in terms of using that 300-350nm band I would consider that as not being much useful since it does not reveal much different information (at least from what I know today). Normal UV photography using the 2" Baader U-filter obviously records mainly in the 350-400nm band due to the steeply decreasing sensitivity of the camera chip with shorter wavelengths and this with 2-4sec exposure time at ISO200-400, f8-f11 for an unmodified Nikon D70/D70s i.e. 8-10 stops below a normal visual light shot (and 1-2 stops faster for UV using a modified D70 with clear quartz glass window) which is in a real outside situation anyway nearly too long. If you have ever tried to shoot a flower with a bee on it in UV, you know what I'm talking about!