The series is directed by Dan Clifton.

The DVD is already on pre-order at amazon UK here (PAL version).

Quite a while ago BBC asked me to contribute my knowhow and some of my work of the invisible to their new three part science series "Invisible Worlds". The first part of the series will be about the natural world and things we humans cannot see, but other species can, like bees, birds, butterflies, spiders, mice etc. because it may be in a spectral area not accessible to our human eyes, but to them.

The challenge was, to transfer my special still life photographic technique of the ultraviolet into the world of HDTV film, but after some weeks of intensive work, especially on lenses, filtering and lighting, I found working solutions for all that.

Using special lenses + filters I have developed, it is now also possible to show (simulated) how bees, butterflies, birds etc. may see the world in comparison to how we do see it - and all in HDTV format.

The following image is a test image, not related to or used from the BBC series but one of my test stills from that time I worked on that... (yellow flower = as we humans see it; right blueish part of the flower and butterfly = simulated tetrachromatic butterfly vision; UV = blue) 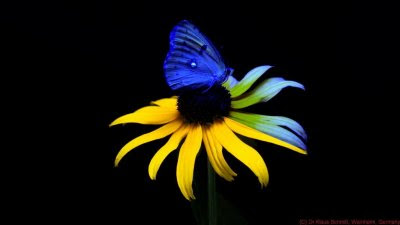 If you like to see a glimpse of my work, have a look at this test HDTV video snippet on youtube directly ...or click on the following small embedded version. Notice how the butterfly patterns change and the all yellow flower petals in the visual show the typical white tipped UV pattern, invisible to us humans, but made visible as a simulation of tetrachromatic butterfly vision, where UV is shown as blue.


[this is a test shot from my own lab while preparing, not from the final series and unrelated to BBC, just to be clear...]

I would like thank Dan and his great team of "Invisible Worlds" for the opportunity to contribute to that series. It was my great pleasure to work side-a-side with such a professional and committed team!