A few years ago I was taking transmission measurements of some special quartz-fluorite lenses for reflected UV photography. This included the then Coastal Optics UV-VIS-NIR Apo 60mm lens, after the merger now called Jenoptik CoastalOpt® UV-VIS-IR 60 mm 1:4 APO Macro.

So since I just recently bought that CoastalOpt® lens, I measured it (amongst others) with my newer spectrometric setup and compared my results with their published data. Surprisingly enough, my older and newer measurements of that CoastalOpt® 60mm Apo lens correlate very well - but not with their now officially published data on their site which shows much lower transmission values. Their formerly published data however showed much better spectral transmission, which correlated well with my own measurements. 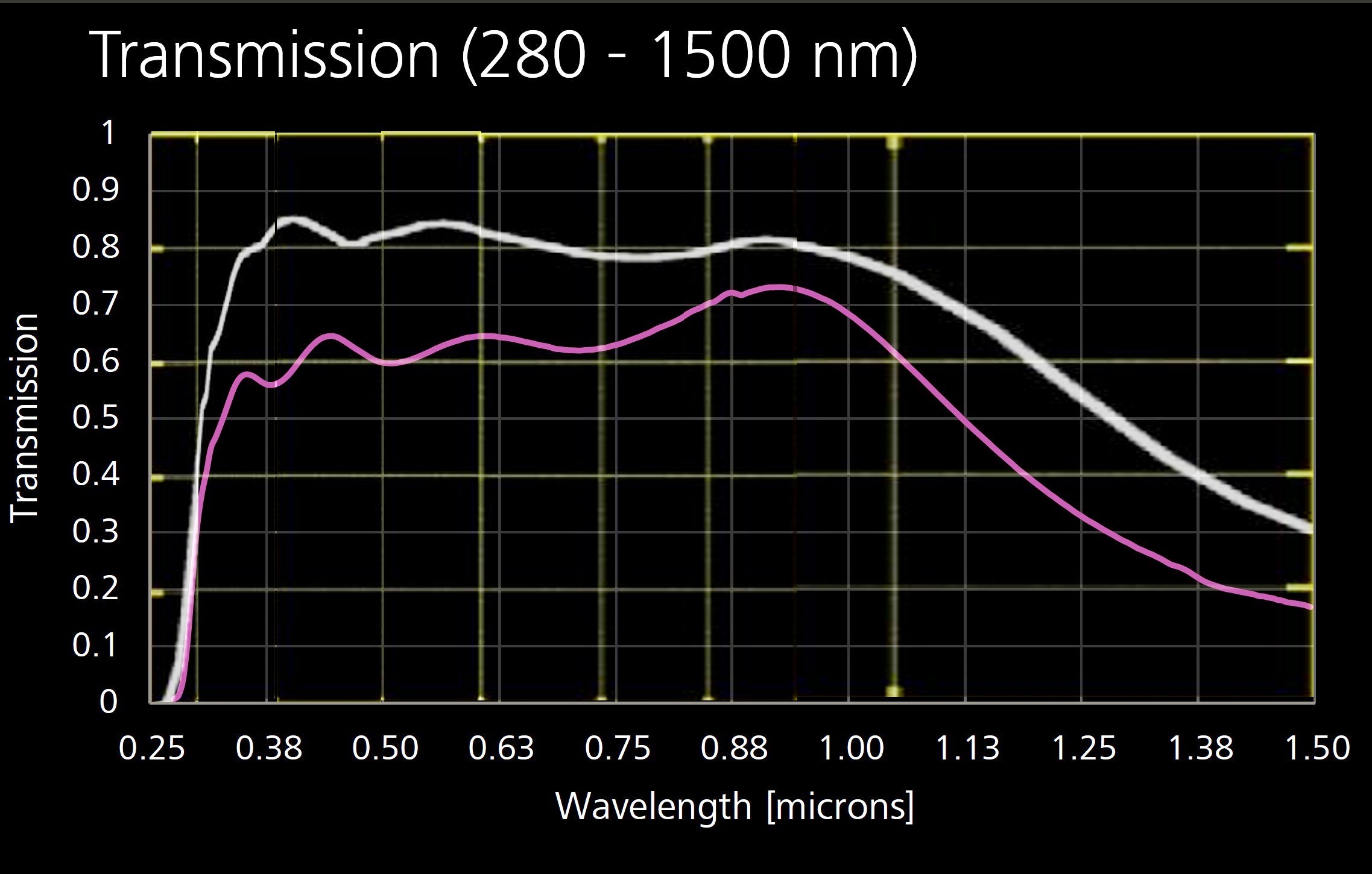 My own measurements back then were these (amongst some other lenses):

and my newer current measurements (reaching deeper into UV) are these:

The differences in transmission of both my measurements are rather small. It is beyond my understanding how these new and quite different measurements (about 20% less) happened; I am just wondering why such an excellent lens is not represented well enough....

I have written about this lens before HERE.

So today more about some UV-VIS-NIR measurements of some highly specialized lenses, which were specifically developed for reflected ultraviolet (UV) photography. This time it is about lenses with 85mm focal length.

Usually a photographic lens should reproduce visible images, which is the wavelength band of about 400-700nm. This is why lens makers apply a special multicoating (aside from achieving higher light transmission), which usually blocks light outside this visible waveband. For biological reflected UV photography however, the UV-A band (300 - 400nm) is the interesting one. So using such a modern UV lens and that (de facto "standard" UV transmitting) Baader U-filter  will work very well together, if both lens + filter have a high enough transmission. Culprit is, that coating for such a wide range is tricky, so quite a few of those lenses are still uncoated.

Here now I have used my UV-VIS-NIR spectrometer system consisting of a stabilized Xenon light source connected with a quartz fiber to a quartz-fluorite condensor which generates a fine parallel output ray shining through the lens to be tested and a receiving Spectralon (R) coated integrating sphere which captures all the light of that diverging beam exiting the measured lens and transmits this via a quartz fiber to the digital spectrometer.

The following lenses have been measured (links lead to my macrolenses site with lens data):

All these lenses show a relatively high UV transmisison, the Quartz Takumar 85mm especially. The Ultra Achromatic Takumar 85mm and Lavision 85mm are not only suitable for UV-A photography for biologic studies (which usually is the 300-400nm UV-A range), but for technical studies like combustion analysis etc. which demands a suitable transmission in the UV-B (also sometimes UV-C) range, which all these three lenses are capable of, reaching down to about 200nm.

The Ultra Achromatic Takumar 85mm shows some notable dip in transmission around 360-370nm, but I have no explanation for this yet - possibly caused by impurities of the used CaF2 cystals. All these three lenses seem to be uncoated. The Quartz Takumar 85mm is not color corrected, so shows quite some focus shift depending on wavelength; reason why it was shortly on the market only and replaced by the Ultra Achromatic Takumar 85mm, which is a color corrected quartz fluorite lens with very little focus shift.

Just a remark, as a high UV transmission is a must for a suitable UV lens, but also good sharpness, high contrast, flare resistance, no hot-spots, etc. are requirements such a UV lens has to meet, and I have not jet mentioned an important point - focus shift. Most of these modern quartz-fluorite lenses have no or very little focus shift, but that depends on the wavelength range they are corrected for.

I have written about other such lenses HERE

...and if you live in Europe, then you have a chance to see some here:

The artist Dr Andrea Daisy Ginsberg will give a talk about the Eden Project, Cornwall, UK in Rappertwil, Switzerland in March 2021 using some of my multispectral flower images to illustrate the difference in perception of colour by different pollinator species.

The Gallery Oldham in Oldham, UK (greater Manchester area) will in 2021 include some of my Caltha palustris (Marsh marigold) simulated bee vision images in a presenation about pollinators.

... and if you live in North America, then you have a chance to see some here:

The San Diego Botanic Garden will give in 2021 a presentation about the difference in our vision and pollinator vision and how this has helped orchids evolve into what they are, using some of my multispectral works on orchids.

The Witte Museum in San Antonio, Texas wil give a presentation on pollinators using some of my multispectral works.

The Butterfly Conservation Club of the Southeast Michigan Butterfly Association will in February 2021 have a presenation about butterfly and plant interactions using some of my simulated butterfly and human vision images.

... and if you live in Asia, then you have a chance to see some here :

Jurong Lake Gardens' Therapeutic Garden - Butterfly Maze in Singapore's Jurong Lake Garden will show in 2021 some of my simulated butterfly vision images, to demonstrate the difference betwen what we see and what butterflies see.

An overview of my works on display may be found HERE

My work for Movies and TV may be found HERE