"Kingdom of Plants: A Journey Through Their Evolution" - new book by Will Benson

I have already written here a few times about that "Kingdom of Plants 3D" three episode series narrated and written by well reputed Sir David Attenborough, which mainly is about Kew Gardens in the UK and the evolution of plants. The series was produced by Atlantic Productions for SKY 3D TV and directed by Martin Williams and from what I heard will later also be shown in some IMAX theaters. Sir David Attenborough is the presenter and guide through the episodes. Now Will Benson, one of the staff members at the time of production, has written this wonderful book about it.

It is 256 pages, 3 pounds heavy (also also available in electronic form) and it includes four pages about insect and animal UV vision and two pages have some of my images in it from that 3D film. Here is one of it, showing a Rudbeckia hirta in visible and UV light:
[click on any image to see it larger] and here for the experienced 3D crosseye viewer, the stereo version:

(quote - from amazon)
This book accompanies the landmark television series Kingdom of Plants 3D: With David Attenborough. In the last 500 million years, plants have undertaken an epic journey that has not only spanned the ages but has altered the very make-up of the planet. It was a journey that began in a dark and barren world, and has culminated in a planet that is draped in rich colours, and overflowing with a diversity of mystifying orchids, exploding seed pods and snapping carnivorous plants. But plants are far more than just beautiful and bizarre. Through the chapters of this book we uncover how plants first began to live on land, how they have become linked with a multitude of animal and fungi partners, and how ultimately they have shaped both landscapes and cultures. With an introduction by Professor Stephen Hopper, Director of the Royal Botanic Gardens at Kew, as well as contributions from leading botanists and horticulturists, this book unpicks the strands of our planet's network of botanical life. Through its pages we reveal the extraordinary ways in which plants have come to live and thrive in all habitats, and we discover how they can provide us with answers to many of the problems that face humanity in our modern age.(unquote) 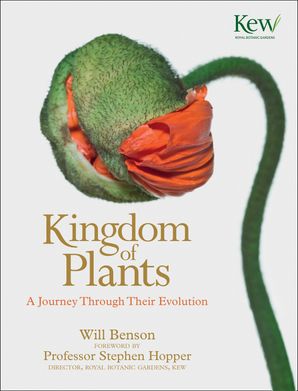 A wonderful book, not just for the coffee table. I'm sure you'll like it as much as I do!