Bad news for us UV or IR shooters: It seems that Nikon has introduced for their newest DSLRs (D3, D3x, D3s, D700, D7000) an intelligent "shutter control unit" using an IR emitting LED / photodiode which tells the camera exactly the time a shutter needs to open an close, regulates that if necessary and if to far outside that permissable zone, sends an error message to the camera display asking for service. A very good idea to extend the lifespan of these shutters which are supposed to live longer than 150.000 actuations. Here now how the D700 shutter and control unit looks like (red arrow points to that shutter control unit) 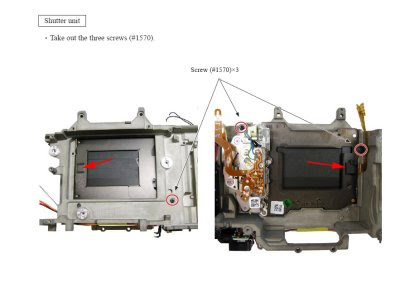 If now the internal cut filter (which usually cuts from 400-700nm and certainly perfectly blocks such IR radiation emitted by that internal control unit) is being replaced by a clear quartz glass window for UV and/or IR photography, which usually allows a 300-1100nm transmission, this internal IR radiation seems to lead at higher ISO settings to fogging of the resulting images, rendering them virtually useless. At base ISO this effect is not noticeable, but for instance at ISO800 and 4 sec exposure, it gets quite noticeable, as this image shows (shots without lens, lens, camera cap on, viewfinder closed) : 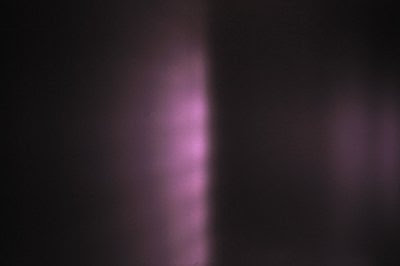 Further tests which have been performed by carefully masking the sensor with black tape and shooting again at identical as above and other higher ISO / longer exposure settings yields a perfectly black image without any signs of such IR fogging/contamination, proving the assumptions. All this has been investigated, tested extensively and is still being discussed at nikongear.com also looking for a possible remedy, which has not been found yet. The first reaction of professional camera converters to these findings came from lifepixel.com which since a few days (Feb 2011) now have a warning on their site (quote):

* Nikon D700, D7000, D3, D3x, D3s - These models make use of Nikon's new infrared self-diagnostic shutter monitor circuitry. This function involved an internal infrared LED emitter/detector chip that could fog images. In most cases it will not be an issue unless you shoot in overcast weather using higher ISO and/or longer exposures. We are working on a workaround solution but in the mean time it may be best to choose a different model or maintain base ISO and faster shutter speeds when shooting. (c) lifepixel.com

Optik Makario in Germany also has a warning on his site now.

It can only be hoped that other camera converters will pick up the news and appropriately inform their clientele about that, so as to avoid disappointments.

TO MAKE THINGS VERY CLEAR: A normal off-the-shelf such mentioned camera, unaltered, WILL NOT SHOW THIS BEHAVIOUR and will give perfect images for normal light photography! Only if the internal cut filter is removed or replaced (which also leads to loss of warranty) AND ONLY IF YOU SHOOT HIGH ISO AND LONGER EXPOSURE TIMES the above mentioned effect might show up!

All this is only given to prevent possible disappointments of UV / IR shooters, but the author does not take on any liability for the information presented here - please make your own tests to confirm these findings for yourself!

I got the info today that Optic MAKARIO in Germany found a way to modify a Nikon D7000 in such a way, that the spoiling of the image through that built in shutter control IR LED system at high ISO / long exposure times will be suppressed. ISO 800 and 1600 are now possible to use with very good results. The effect still exists but in much lower amounts, so at very long exposure times and very high ISO settings it will still be visible though. This was tested out good for shooting IR and my personal assumption would be, that this can be applied for UV work, too.

Stay tuned, more will follow on that fascinating subject... More info on this very interesting field may be found on my site http://www.pbase.com/kds315/uv_photos
Gepostet von Dr Klaus Schmitt unter 10:17 AM